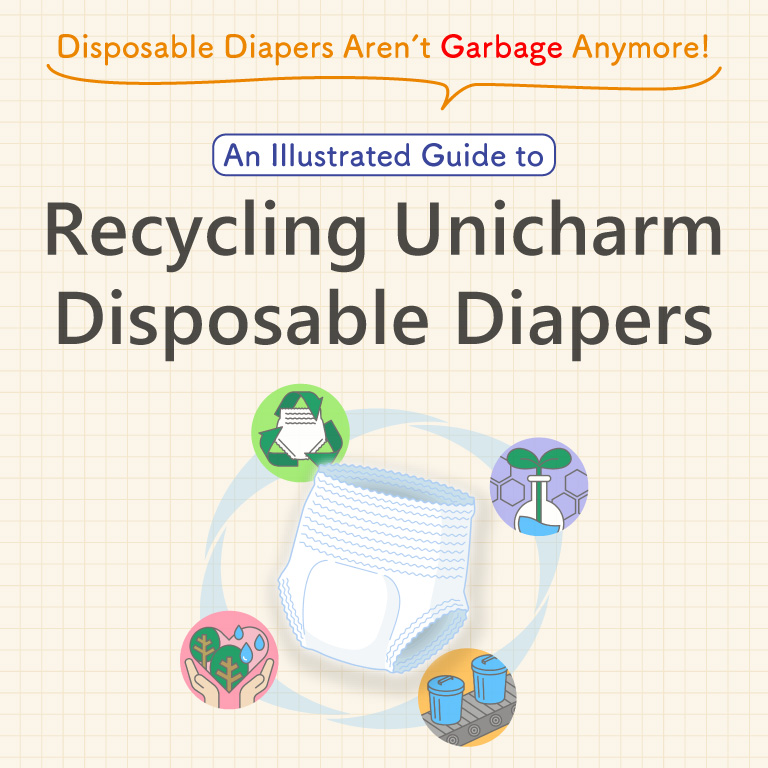 Study Theme: How disposable diapers are made of? 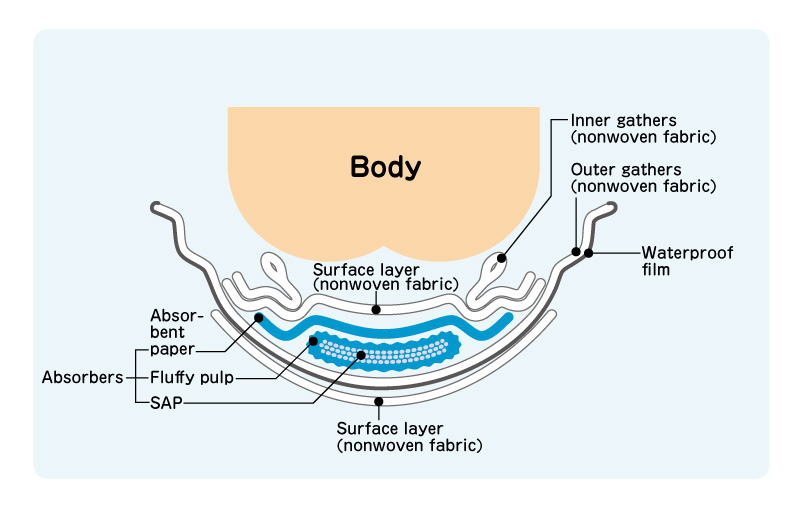 First, let’s take a look at how disposable diapers are made of.


As you can see in this diagram, a disposable diaper has several layers. The surface layer that directly touches the skin is made of a material known as “nonwoven fabric” which feels nice and soft to the skin and also absorbs and retains but not discharging moisture. Underneath that is a layer of “absorbent paper” which moves the moisture further inside the diaper. Under this is a layer of “super-absorbent polymer (SAP)” which is wrapped in “fluffy pulp” and has a capability of absorbing and retaining moisture. The outside surface of diaper is covered by a “waterproof film” that further prevents any of the absorbed moisture from leaking out.


Because of its complicated structure, disposable diaper requires a special technology for recycling.

① What is ozone? 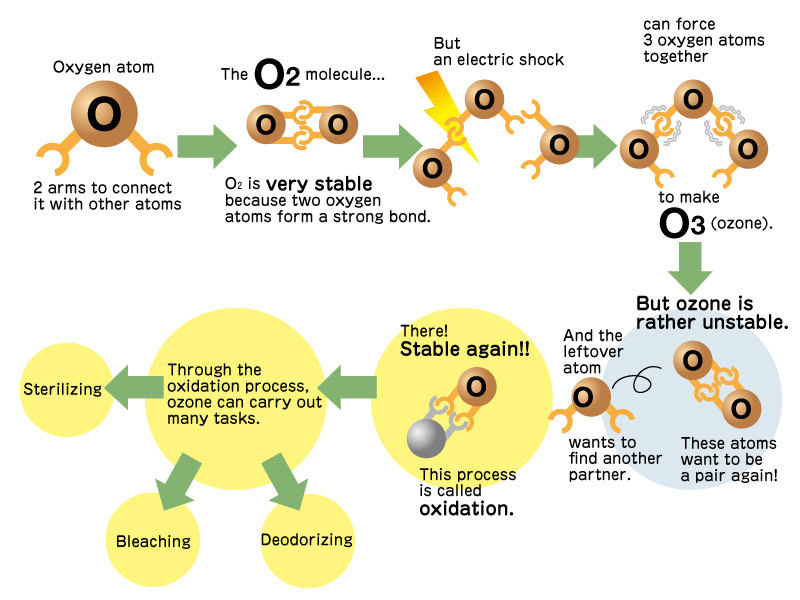 The pulp extracted from the used diapers is subjected to ozone treatment. Ozone is a molecule that consists of three oxygen (O) atoms and its chemical symbol is O₃.


The most common form of oxygen, O₂, is very stable because two oxygen atoms form a strong bond with each other whereas ozone is rather unstable. Therefore it has a nature of returning to the more stable O₂ and, when it finds another substance, it tends to shed one of its O atoms and attach to the other atoms. Such process of oxygen atoms attaching to other atoms is called “oxidation” which, in other words, makes ozone a very strong and effective tool for oxidizing substances.


With this strong oxidizing power, ozone can be used most effectively for sterilizing, bleaching and deodorizing.

Did you know... how ozone protects us from ultraviolet rays?

The atmosphere contains ozone most of which is concentrated in the stratosphere from approx. 10 to 50 kilometers above the earth’s surface. Known as the “ozone layer”, this band of ozone protects the lives on our planet by absorbing dangerous ultraviolet radiation from the sun.

However, scientists discovered some years ago that freon, a gas used in refrigerators, air conditioners and aerosol sprays, was being released into the air and destroying the ozone layer creating an “ozone hole” in the atmosphere. In order to stop to this critical and serious phenomenon, freon production is now banned or strictly regulated in most countries. 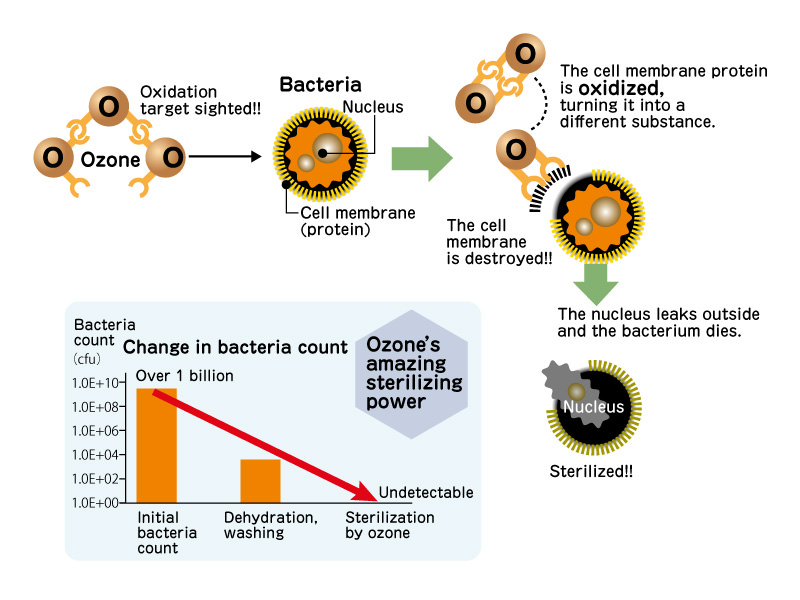 Used diapers contain many kinds of bacteria found in human waste. As much as a third of these bacteria may remain even after washing diapers. This is where the powerful oxidation effect of ozone plays the major and active role.


When an ozone encounters a bacterium, it sheds one of its oxygen atoms(O) which then attaches to the outer protein membrane of the bacterial cell. Attaching that extra oxygen atom to the protein (or oxidized) transforms the protein into other substances destroying the cell membrane and killing the bacterium.


As is shown in the above diagram, when pulp is ozone-treated, the number of its bacteria falls down to almost zero. The soiled pulp has now been reborn as safe and clean pulp! 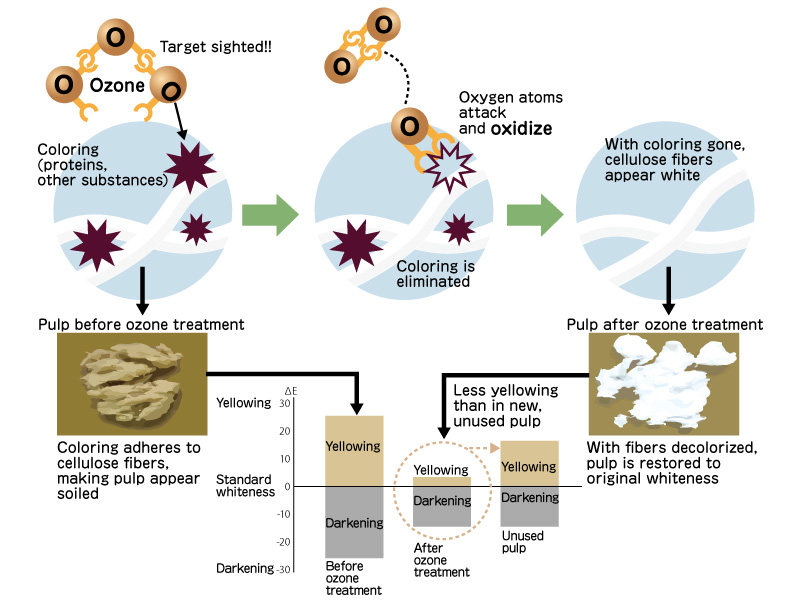 Brand-new disposable diapers appear pure white because cellulose, the main ingredient of unused pulp, is white. When the diapers are used, the coloring from proteins and other substances in human waste yellows or darkens the fabric.


Ozone however does not overlook these coloring substances and it rather targets them for oxidation by releasing one of its oxygen atoms(O). The oxidation process disappears the source of coloring and restores the cellulose fibers to their original whiteness.

Ozone’s deodorizing effect is also caused by oxidation. When ozone encounters a substance that produces a bad smell, it releases one of its oxygen atoms and oxidizes the target which transforms the substance with smell into a different type of substance with no smell.


By using ozone to sterilize, bleach and deodorize, the used pulp restores its original high quality similar to the unused new pulp.


Next, let’s take a look at how to restore super-absorbent polymer (SAP), another key material of disposable diaper.

① What is SAP?

The ability of disposable diapers to absorb moisture and prevent it from leaking out is due to the effect of “super-absorbent polymer (SAP)” which is also called as “high absorbent polymer”. A “polymer” is defined to be a very large molecule made up of the multiple number of smaller molecules linked together. Polymers are also known as macromolecules.


Before we explore the secret of how SAP works, let’s look into a bit more about polymers. The best-known polymer is plastic. SAP is a type of plastic and can be manufactured artificially. The secret of SAP’s ability to absorb moisture can be found in the structure of polymers. 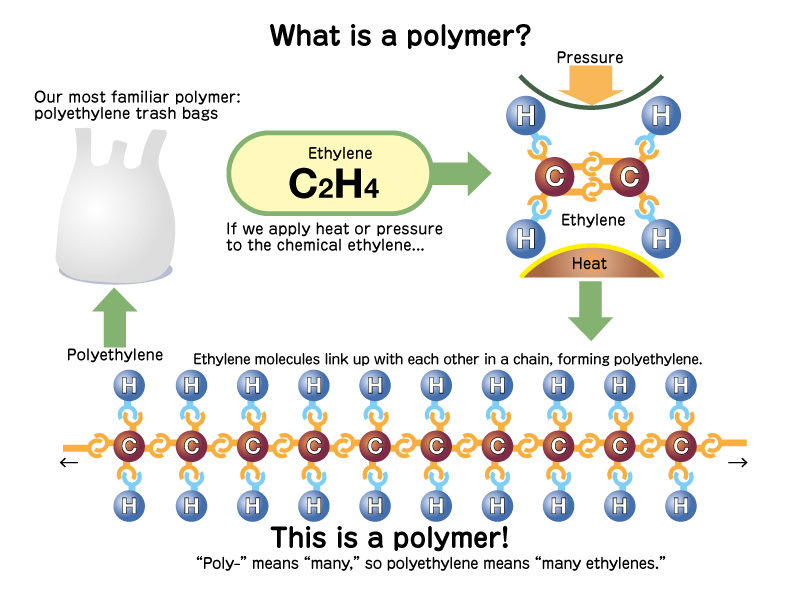 SAP is such a complex polymer, therefore, before we try to understand its structure, let’s look at a simpler polymer. For instance, polyethylene which is used to make trash bags is made up of many chemical molecules called ethylene attached together. One special characteristic of polymers is that the molecules are tightly connected to each other like a link of chain. 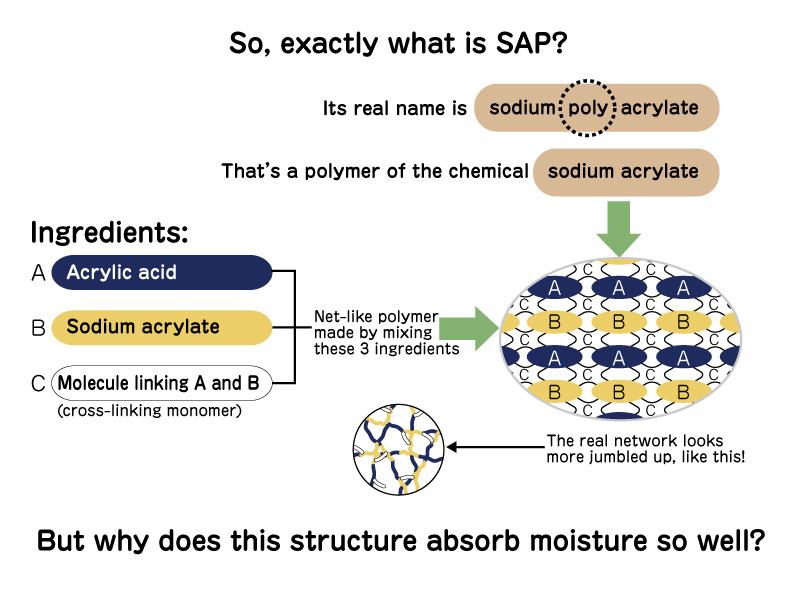 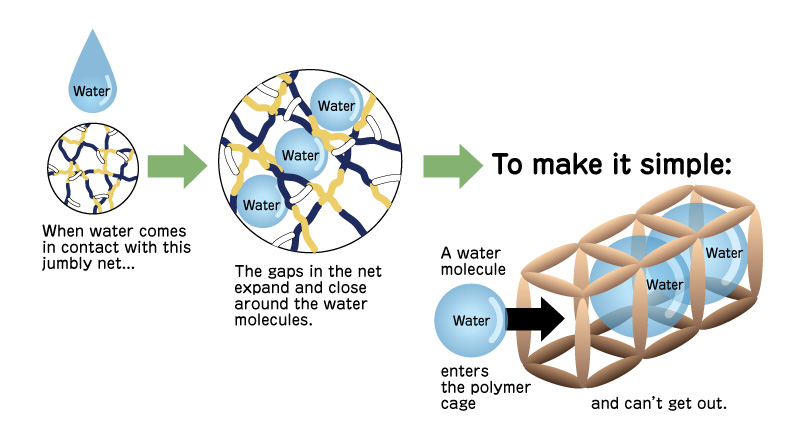 The SAP used in disposable diapers is a polymer named sodium polyacrylate.


This is made up of many molecules of acrylic acid and sodium acrylate linked together, however, the links are not as simple as they are in polyethylene. A molecule known as a “cross-linking monomer” serves as a kind of bridge that connects the other molecules here and there forming a three-dimensional network.


When a molecule of water comes in contact with SAP, the gaps in this net expand and close around and retain the water molecule. That is how disposable diapers are capable of absorbing and retaining moisture.

Unicharm is working on the development of restoring not only pulp but also SAP. To completely restore SAP to its original form, we need to get rid of all moisture it has absorbed and resume its full capability of absorption. 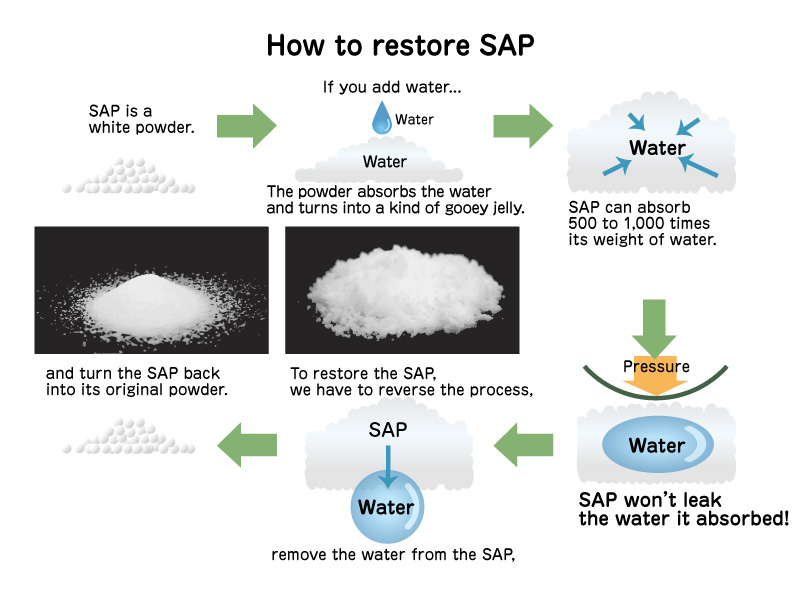 Up until now, it was commonly known to use calcium for removing moisture from SAP. However, with this method, the calcium would remain in the restored SAP which results in lowering its quality.


Unicharm worked on this problem by teaming up with scientists at Hokkaido University and we jointly developed a new method of removing moisture without lowering the quality of SAP by using acid. We then applied the ozone treatment to the SAP as same as pulp to ensure that the restored SAP is completely safe and clean. 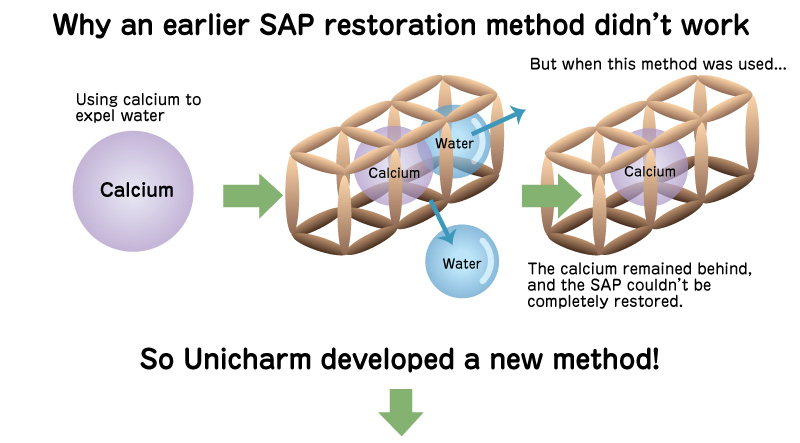 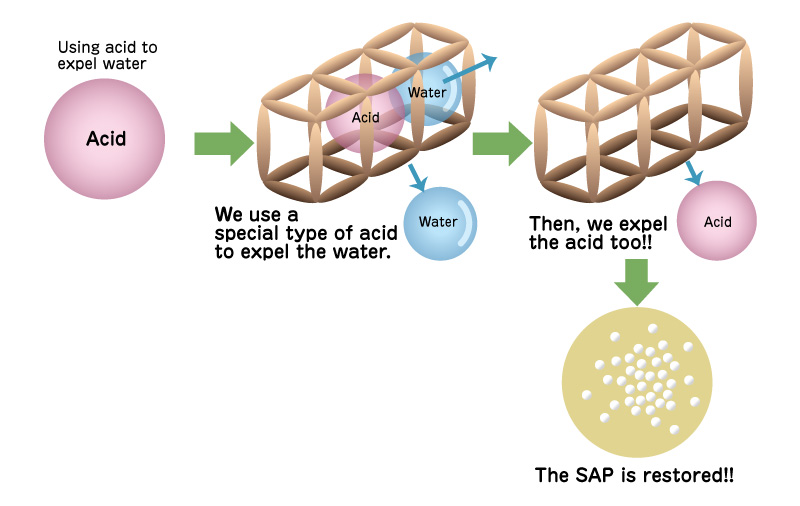 Next: What happens to the used diapers if they are not recycled?